Home > Blog > Why Did the Mortgage Crisis Happen, Part 4

Why Did the Mortgage Crisis Happen, Part 4

In Part 1, I asked why the mortgage mess happened, and why did it happen when it did.

Part 2 explains the role of the Great Moderation and the mild housing cycle in the 2001 recession.

Part 3 explains the role played by securitization of mortgages.

Now I explain how the last recession set in place the triggers for the present mortgage mess.

Let’s
remind ourselves of the strength of the housing market thanks to the Great
Moderation and the mild housing cycle of 2001. If a mortgagee could not make payments, there was no problem for the
mortgage-backed investor. Home
appreciation meant that borrowers could simply sell at a profit if unable to
make payments–or they might refinance and use the cash for another year’s
payments. Or in a worst case, the
mortgage servicer foreclosed, but there was no loss because the house sold for
more than the principal due on the loan.

These
were to two main ingredients of the mortgage mess. Now let’s talk about how they came together in the early 2000s. 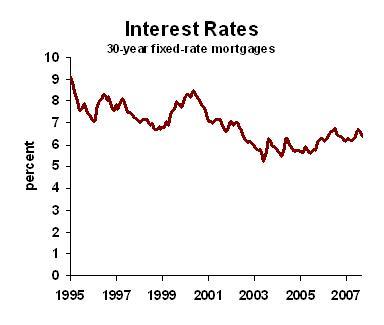 Low
mortgage rates brought first-time homebuyers into the market earlier than
normal. There was also a great deal of
shuffling around of existing home owners, as they moved from one home to
another. Keep in mind that transactions
of existing homeowners just push the peas around on the plate: when a family
buys a new home, it is typically selling an old home, so net demand is
zero. Not so with first-time
homebuyers.

There’s
a normal life-cycle for first-time homebuyers. Young families get their finances in shape, show that they can handle
debt, and accumulate a little bit of down payment. Then they buy. Well,
starting in 2002, first-time homebuyers were able to buy ahead of
schedule. Mortgage rates were so low
that families who had expected to wait until 2004 were able to buy their first
home in 2002. This trend accelerated
when mortgage rates hit their low point, five and a quarter percent, in mid
2003. This interest rate was even lower
than the lowest rates of the 1960s.

So
housing demand was stimulated by low mortgage rates, pushing home prices
up. Builders started to meet the increased
demand, but it took them a while to gear up construction schedules. In the meantime, home prices
accelerated. In the prior decade, the
1990s, home price appreciation had averaged a mere three percent per year. Three percent per year! But low mortgage rates changed all
that. National average price measures
showed six to eight percent gains in the early years of the new century. Those price gains brought out investors. 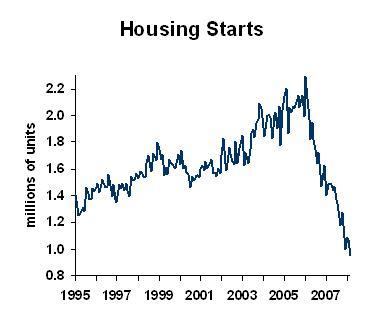 Stock
prices had peaked in 2002 and fell through 2002. Even after stock prices began to rise, the levels of stock prices
failed to match the earlier peaks, so stock investors were disappointed. They looked around and said, "Gee,
houses sure do well. They never seem to
go down, they just go up." The
three percent gains of the 1990s seem puny by Wall Street standards, but stock
investments are mostly unleveraged; at most, they have a 50 percent loan to
value ratio. Houses can be leveraged,
with 90 percent or even higher loan-to-value ratios. Here’s a bit of arithmetic: if you pay 10 percent down on a house
that appreciates by three percent, your equity grows by 30 percent!

Investors
constituted net new demand, along with first-time homebuyers. In response to the strong demand, prices
appreciated at an even faster rate. Homebuilders
took this as a challenge, and housing starts rose from 1.5 million – a typical
pace – to 2.3 million units, a fifty percent gain.

The
growth of net new demand from first-time buyers and from investors was helped
by carefree attitudes engendered by the Great Moderation, along with mortgage
securitization. Mortgage investors
tested the waters with lower down payments, less documentation of loans,
borrowers with lower credit scores – and the tests looked good. A more conservative sort of person would
have continued the tests through a real downturn, but that sort of person lost
business to the mortgage investors who went full bore ahead.

Our
economic history includes periods of low mortgage rates that did not lead to a
disaster like we are experiencing today. No disaster occurred in those earlier eras because they pre-date the
Great Moderation and mortgage securitization. The 1990s had the critical elements of the crisis, but not the trigger:
low interest rates and a weak stock market.

Everything
came together in the perfect storm that we now call the mortgage crisis.

Given
what we’ve learned so far, what does the future hold for economic cycles,
mortgages and the housing market? We’ll
address that in our final segment.