Home > Blog > Why Did the Mortgage Crisis Happen, Part 3

Why Did the Mortgage Crisis Happen, Part 3

Previously, I posed the question of why the crisis emerged when it did, then I explained the role of the Great Moderation.  Now I talk about how securitization formed a building block of the crisis.

The
second factor enabling the mortgage mess was securitization. The first
securitized mortgage transaction took place in February 1970, but primitive
computers were not up to the many flavors of securitization that would
eventually arrive. As the housing market boomed, securitization took off. 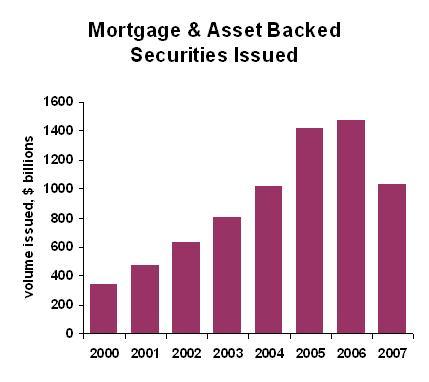 Securitization
had some affects that helped form the mortgage mess. One was the growth of mortgage brokers. At first, the traditional lenders–savings and loans plus some
banks–used securitization to help their balance sheets. It was a great move. No institution funded with deposits of five
year maturity or less should hold 30-year loans.

Independent
mortgage brokers, who could help consumers shop around for the best deals, came
to dominate the industry. This business
model came to dominate partly because consumers liked the idea of working with
someone beholden to no one institution, and partly because the most successive
(aggressive?) mortgage personnel gravitated to independent shops, where their
compensation was totally on commission. The independent mortgage broker didn’t much care what happened to the
loan once the paperwork was finished and he got his fee. Furthermore, there was no mortgage-lender
gossip ("Gee, we sure are originating a lot of crappy loans this
days.") to rise to the executive suite. The independent mortgage brokers also enabled a more fraudulent environment,
but fraud is not the dominant reason for the current mortgage mess–it’s more a
side dish than the main course of explanation.

Along
with securitization came investors. The
main funders of mortgages used to be lenders. Now they were investors. Investors think differently than lenders. Investors hold a security while it is doing well, selling when
they sense that the prospects for that investment are weaker. They assume liquidity, because that’s what
they are used to. A lender, on the
other hand, makes a loan and assumes he will hold it through thick or
thin. The investor buys a
mortgage-backed security thinking he can pawn it off on a "greater
fool" if need be.

Now to
top it off, mortgage securitization became very, very complex. Think first about a simple example of
financial engineering: stripping Treasury bonds. Each bond has two coupons plus a maturity. A 30-year bond can be decomposed into 60
coupons plus the return of principal. A
bundle of 30-year bonds can be combined into 60 different zero-coupon
securities. No problem.

When
the securities underlying the transaction are not issued by the United States
Treasury, you want to think about credit risk. Some mortgages were guaranteed by Fannie Mae or Freddie Mac, so the
mortgage risk was small. Or was it
zero? Would Congress let these
institutions fail if they guaranteed too many dodgy loans? Maybe yes, maybe no. An interesting issue. Other mortgage-backed securities had private
guarantees. Nice–if the guarantor
would survive a housing downturn. In a
mortgage pool with multiple investors, who takes on the credit risk? It can be spread evenly among the owners,
but that’s boring. More interesting is
to create some low-risk segments, and some middling-risk segments, and some
high-risk segments.

This is
far from complicated enough, however. Let’s add prepayments to the broth. When you buy a mortgage-backed security, is it backed by mortgages that
may be refinanced in two years, or may stay on the books for the full 30 year
term. That depends on interest rates,
but not just on the level of interest rates. Refinancing is "path dependent," meaning that refinancing volume
will be different at "seven percent down from nine" as opposed to
"seven percent up from five." You really have to run a thousand possible interest rate paths in a
Monte Carlo simulation to understand prepayments.

So far
we’re only thinking first mortgages. We
could also securitize seconds. The
value of a second mortgage depends on all the things we’ve discussed before, as
well as on the characteristics of the first mortgage.

Now the
securities get interesting. The basic
mortgage-backed securities include different tranches. (One tranche might get the first 12
principal payments to come in, making it very safe. Another tranche might get some of the later payments, making it
very risky.) Tranches from different
mortgage pools can be combined into Collateralized Mortgage Obligations
(CMOs). There are even CMOs comprised
of CMOs, like a fund of funds.

All of
this becomes very confusing and hard to analyze. The investors didn’t really know what they were buying in many
cases. They fell back (as we all do) on
a few shorthand numbers, such as estimated duration (weighted-average maturity)
and credit grade. The fact that both of
these concepts were just wild guesses for complex CMOs was lost on the
investors.

We have
the Great Moderation and a very mild last housing cycle, coinciding with the
development of securitization. Next
we’ll see how the last recession sowed the seeds for the current mortgage mess.