My new forecast (dated May 5, 2008) looks a little brighter: no negative quarters for GDP. 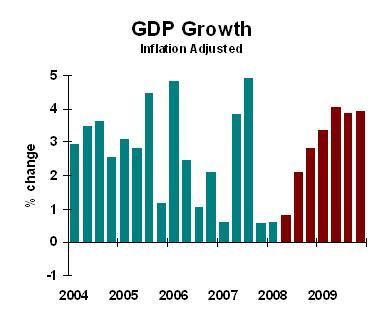 My bottoms-up approach has recently been giving me more optimistic forecasts than I expect.  Recently, more optimistic than I had expected has worked out well.  I think the Fed is about done cutting interest rates, and long-term bond markets will figure this all out earlier.

Inflation won’t diminish too much, not with the Fed putting the pedal to the metal.  Look for continuation of four percent inflation, which induces the Fed to push rates up later this year. 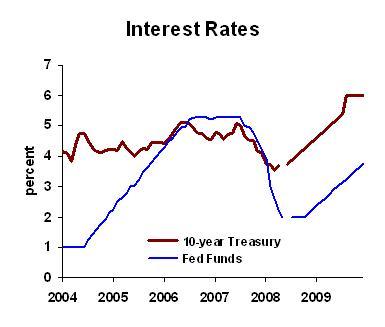 Risks to the Economic Forecast: The tightening of credit standards could yet push Main Street business down, but in the near term, the greater potential is that the economy takes off, pushed by the Fed’s stimulus.  Looking longer into the future, at some point the Fed will hit the brakes.  Soft landing?  Don’t count on it.  But that next cycle is probably two years away.