Economic News: Not So Bad

I’m back from vacation, surveying the news of the past week and a half.  (I had planned on blogging throughout the vacation, but instead … just vacationed.)  Here’s my take on the data:  not so bad.

Gross domestic product is our broadest measure of the economy, and it’s growth rate was certainly anemic, but it was not negative, as I had expected. 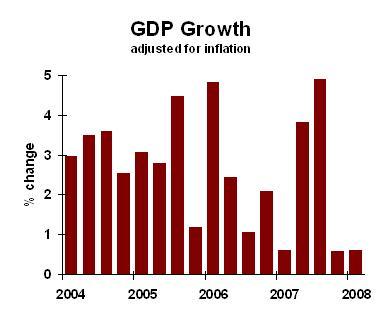 Employment declined again, but not by too much.  (A drop in jobs is consistent with total production that’s flat, thanks to improved productivity per person.) 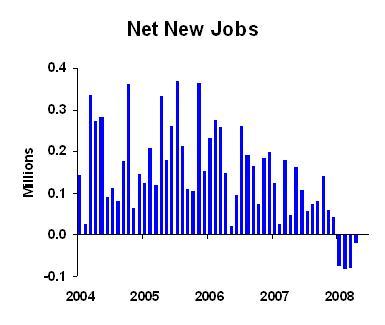 The latest monthly decline in total employment was 20,000 jobs, on a base of 138 million.  In fact, such a small drop is far less than the reliability of the official employment statistics.  (The standard deviation for month-to-month changes in total employment is 65,000 jobs, so a 90% confidence interval for the latest report goes from minus 117,000 jobs to plus 97,000 jobs gained.)  My conclusion: bad, but not so bad as we feared.

We also got data on new home sales: down, at about the same rate of decline we’ve seen in recent months.  Non-residential construction resumed its expansion: 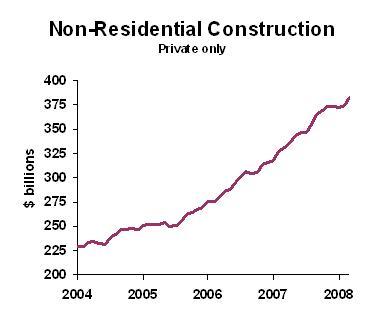 Strength was surprisingly widespread, with notable gains in hotel/motel, office, power production and manufacturing.  Yes, construction of manufacturing buildings expanded, despite the drop in manufacturing employment.  Somebody is optimistic out there.

Consumers continued to be gloomy, according to various polls.  I’m not too concerned about their attitudes, because once the fundamentals turn up, attitudes will follow.  Actual consumer spending was good in March.  Car sales don’t follow that pattern, though: 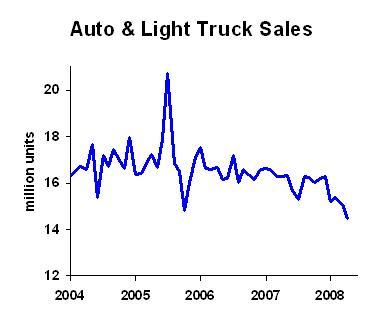 The detail is interesting.  Over the past 12 months, total light vehicle sales (what the chart shows) dropped by 4.3 percent.  The worst component: domestic trucks, down 8.6 percent.  The best component: import cars, down only 0.4 percent.  What I think we’re seeing is the abandonment of gas-guzzlers more than anything else.

The theme of these comments is that the news has not been as bad as I had feared.  I’ll work up a new forecast after a sojourn to Starbucks.  (Why, of why, are the Europeans incapable of brewing a decent cup of coffee?  Why does Starbucks not have a single store in Amsterdam?)