Home > Blog > Quit Rate Down, But Not in the Dumps

Quit Rate Down, But Not in the Dumps

The rate at which employees are voluntarily quitting their jobs is down from its peak, but still much higher than in the aftermath of the 2001 recession. 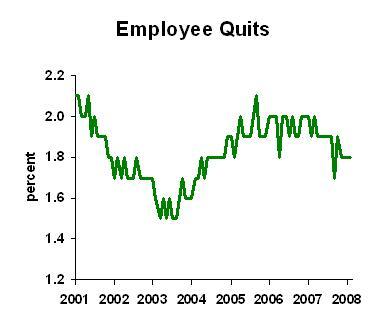 We only have data since December 2000, but this appears to be a lagging indicator, meaning that it hits bottom well after the overall economy hits bottom.  It always takes a while for folks to figure out that the economy is soft.  Nonetheless, it’s a good measure of employee attitudes.

I say that when an employee quits just because his boss is a jerk, he’s probably just trading in one jerk of a boss for another.  I’ve said that to my own staff.  (They said they were willing to take that risk.)

Although the quit rate is not at its peak, employers should continue to focus on increasing employee retention.  You might want to check out my 7 Steps to Better Employee Retention.