Over on Linked In, Sailaja Sivalenka asks a good question:

Recently, I have come across a few articles that state the reason
behind the subprime crisis in USA to be the result of inaccurate credit
scoring which could not sufficiently predict subprime default risk.

What are your thoughts on this subject?

Inaccurate credit scores may be part of the problem, but you don’t need that theory to explain subprime lending errors.

The biggest problem is out-of-sample estimation problems.  If you look at the performance of subprime borrowers when 1) the housing market is strong, and 2) there is very little subprime lending going on, and then you extrapolate to an economy where these conditions are not met, you’re taking on huge risk.

You could lend to a dog when the housing market is booming and not get burned; the dog wouldn’t make any payments, but he could either flip the house for a profit.  In worst case scenario (heart worms, distemper) the lender forecloses and sells the house for a price above the mortgage balance.  No problems.

Condition 2:  when few subprime loans are being made, they were probably to the best of the subprime lot.  Two people with identical FICOs have different stories; one’s low score is due to an accident or hospitalization, but the person is bouncing back.  Another person with the same FICO is just irresponsible.  In early days, I think that lenders found the first type of subprimes.  As the housing market boomed, lenders widened their search for customers to the second kind.

Here’s a simple way to think of it: think of an X-Y graph with some data points and a line fitted through the points. 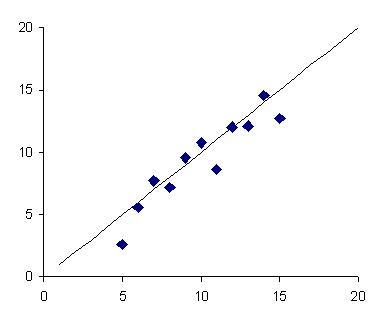 You should be skeptical of your estimate of the slope of the line if you are looking at data points outside of the range of data over which the line was estimated.  You may very well be looking at a very different shape when you look at a wider range of data: 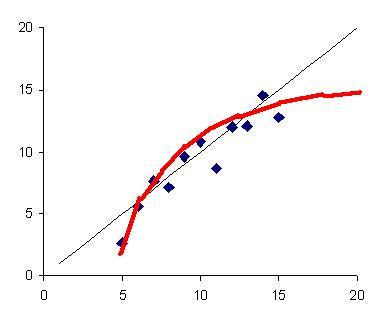