The rough rule-of-thumb for a recession* is two consecutive quarters of declining GDP.  By that gauge, we’re probably not in a recession now–but with very little margin for error.  Call it a borderline recession or perhaps a recessionette. 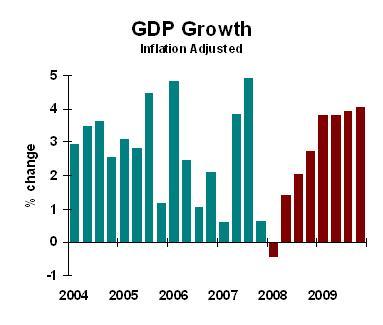 What was new in the recent GDP report was an inventory downturn.  Historically, inventory swings have been tremendously destabilizing to the economy (See Chapter 3 of Businomics for an explanation.)  However, the last two decades have seen milder changes in inventories, along with lower inventory levels relative to sales.  We economists saw businesses managing their inventories better (Wal-Mart being a great example) and put less volatility into our economic forecasts.  My own economic outlook for the current quarter is weaker due to the new inventory cycle.

Business planning implications:  it’s a downturn, which may develop into a full-blown recession, but it is not the end of the world.  At worst, 93 percent of the people who want jobs will have them.  My doctor and my mailman will both keep spending, thanks to stable incomes.  The economy will recover by the second half of this year, whether Congress gets around to passing a stimulus bill or not.  So over-react, but don’t ignore the cycle, either.

* Recessions are defined by a committee of a non-profit foundation, which looks for a broad decline in economic activity.