Home > Blog > New Home Sales Could Be Better Than They Look

New Home Sales Could Be Better Than They Look 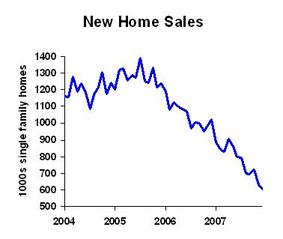 However, at some point sales will be better than the official statistics, and that point might well be now.

The Census Bureau data misses canceled sales, which ran around 40 percent of total sales for some major homebuilders last year.  The bureau looks at particular houses; when one is reported sold, that house is removed from the statistical database.  If the sale falls through–like, if the buyer gets cold feet or does not qualify for a mortgage–Census never goes back to adjust the data.  So when cancellations are on the rise, sales are lower than official statistics.  What happens to those houses whose first sale was canceled?  When they get sold a second time (or a third), in a sale that finally closes, they are not counted as new home sales.  They are not counted because those houses were outside the Census Bureau database.