December’s bad retail sales report (details here) lead us to wonder if we now have proof of a recession.  I think not, though the report is certainly bad news.  Let’s walk through the data: 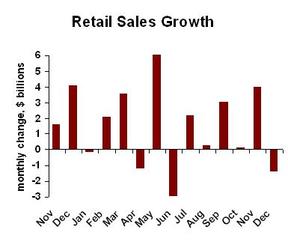 Observe that the month-to-month data are naturally jittery.  The bad December report does not automatically mean we are in recession.  The third quarter (July, August and September) showed strong GDP growth despite coming on the heels of June’s very bad retail sales figure.  Now let’s look at the role of gas station sales: 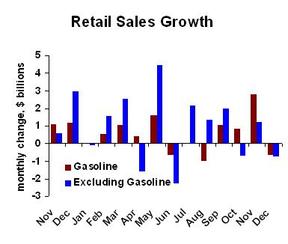 Note that both of these charts are in dollars of change, not percentage change.  The second chart shows that almost half of the dollar drop in retail sales was due to gasoline.  You may recall the gasoline prices rose in November, then retreated in December.  The retail sales report is NOT adjusted for inflation, so gas prices push gasoline sales volumes up or down a lot.  What the gas data tell us is it’s bad, but not quite as bad as the overall number shows.

Now let’s smooth out the data by looking at 12-month changes: 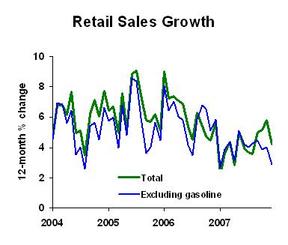 Consumers are clearly increasing their spending measured over a longer time period, but they have slowed the growth rate of spending substantially.  Now, let’s look at the actual level of the data: 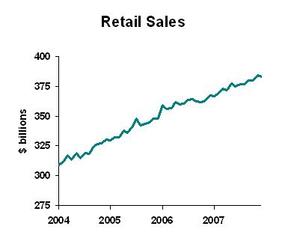 The December decline in sales looks like just another little wiggle. and we routinely have such wiggles.

Economic Forecast for Business Planning:  The retail sales data do NOT confirm that we are in recession, but it’s still possible that we are either in a recession now, or headed that way.  Business leaders should have in place their contingency plans for a worsening of this slowdown.  If consumer spending continues to decline for a couple of more months, then there’s no avoiding a recession.  However, there’s still a good chance that we are looking at a one-month blip, and the economy will grow–albeit slowly–this year.