Home > Blog > Is It the Economy or the Strategy? Another Starbucks Tale

Is It the Economy or the Strategy? Another Starbucks Tale

Seriously, this blog will NOT become all Starbucks all the time, but the current news is too much a teachable moment.

Previously, executives had blamed the soft economy for the slower
traffic, pointing to other retailers who have seen their sales slow,
and blamed higher dairy costs for eating into profit and forcing the
company to raise prices. But in a conference call, Mr. Schultz said the
company shouldn’t just blame the economy and that Starbucks’s heavy
spending to accommodate its rapid expansion created a bureaucracy that
masked its problems.

What does your favorite economist say about the role of the economy?  Is it the economy, or is Schultz right?

I say yes.  It is the economy, and Schultz is right, too.  First, the economy is certainly impacting Starbucks.  Their products are highly discretionary purchases.  Someone loses a job, or even more common, gets nervous about losing a job, and what do you expect them to do about unnecessary spending?  Consumer confidence has been falling.  For the great mass of people who still have a job, that’s no big deal.  But a growing percentage of consumers are seriously nervous.  It only takes a few percent of your customers to stay away for a company selling a luxury product to face declining sales. 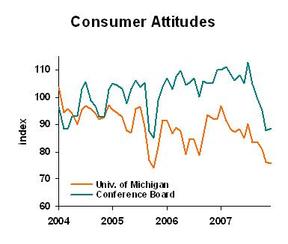 So if it’s the economy causing their current weak sales, why should Schultz shake up the corporate strategy?  Because sometimes it takes an economic downturn to make you realize that things need shaking up.  Actually, Schultz realized this a year ago when he wrote his famous memo (which I blogged about here.)  He raised serious concerns about the "Starbucks Experience," how the customer feels in his or her transaction, which is the core of the Starbucks business.  It’s like Disneyland is not just a roller coaster place, and a Lexus is not just a car.

At the risk of sounding like one of those syrupy motivational speakers, it’s never the wrong time to focus on your customers.  Good luck, Howard.