Home > Blog > Employment Weak, Unemployment Up: Are We In a Recession?

Employment Weak, Unemployment Up: Are We In a Recession?

Hard to put a positive spin on today’s news, except maybe that it could have been worse. 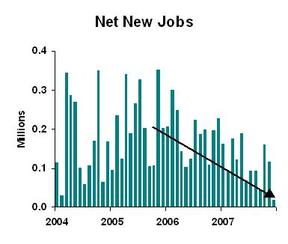 There was job growth last month–at a minuscule level.  All the gains were in the service sector, which is no surprise.  Unemployment also moved up again: 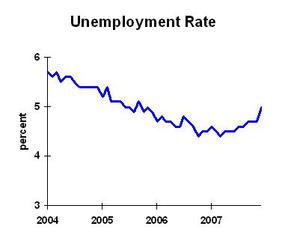 Although the unemployment rate is moving up, job growth is still positive.  (How do we have both employment and unemployment rising?  Growth of the labor force thanks to growth of population.)

The Fed Watchers are saying that another rate cut is guaranteed (not they are really putting their own money behind that "guarantee.")

Is this recession?  Not necessarily, though the current path resembles the road to recession.  The key numbers to watch now is consumer spending in December.  We’ve know that housing was weak; no surprise that construction employment was soft.  But if consumers keep spending, there will be no recession.  We get retail sales data January 15, 8:30 am eastern time.