Home Prices Falling in Most Cities

Home prices are falling in the major cities, according to the Case-Shiller data. 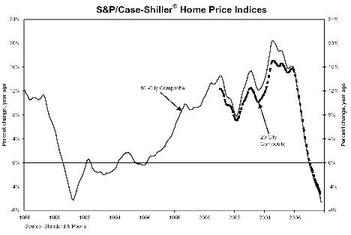 A couple of things to keep in mind: the hinterlands–meaning the area outside the 20 largest metropolitan areas–are doing better than the big cities right now, so the national average isn’t quite so bad.

As always, the average masks the most interest stories.  Three of the 20 largest cities have home price increases over the last 12 months (Charlotte, Seattle and Portland), though all cities are showing month-to-month declines in the latest two months.

On the downside, it’s a lot worse than average in some places.  Cities with double-digit 12-month declines are Detroit, Las Vegas, Miami, Phoenix, San Diego and Tampa.