A few hardy volunteers at the Oil Drum are tabulating press releases from dozens of companies to identify expected output from megaprojects.  It’s a large task, but they are doing it.  Their chart is intriguing: 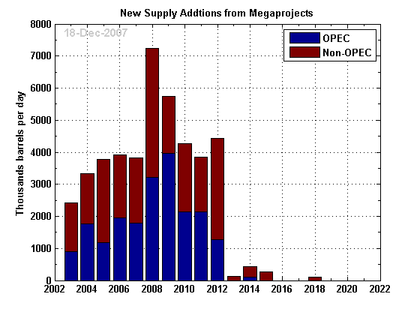 Hat tip to Jim Hamilton at EconBrowser, who provides some context:

Because production from older fields naturally declines as the oil is removed, we need to find something like 3-1/2 million barrels per day in new
production each year just to keep global production from falling. And
although the projects identified above as having a 2008 start-up are
supposed to begin production next year, production at the peak levels
reported above is often not anticipated until 2010 or later.

The Oil Drum people seem to be a) peak oil believers, and b) dedicated to open, honest, transparent discussions.

OK, it looks like we’ll be having net gains in production in the coming years.  By how much does oil demand grow from year to year?  Recent data come from the U.S. Energy Information Administration:

Note that the price of oil (West Texas Intermediate) averaged only $41 dollars a barrel back in 2004; conservation was not really kicking in.  Global economic growth also factors in; it has been edging up, thanks to emerging countries.  Nonetheless, I think there’s a good chance we’ll see a greater increase in oil production next year than consumption.  If that’s the case, then prices will start to edge down.  Then commodities investors may–or may not–panic and send prices down sharply.

The folks who are sure they know what will happen to oil prices next year are not to be trusted on the subject–including me.