Mark Perry over at Carpe Diem has an interesting post showing the distribution of mortgages: 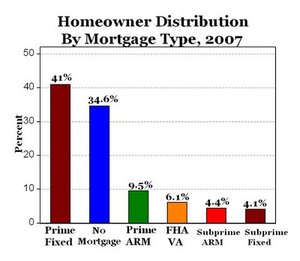 Note that about one out of three homes has NO MORTGAGE AT ALL.  Mark has a companion chart showing which categories have foreclosures.  (Hint: the folks with no mortgages have no foreclosures.)

Now I have to share a brief summary from the Wall Street Journal story, "Mortgage-Relief Plan Divides Neighbors" (subscription required).  Karenn and Steve Oropeza bought a house in Corona, California in 2004 for $557,000, with a $500,000 mortgage.  They refinanced three times, most recently in 2006 for $835,000.  In other words, their cash out from refinancings was about $335,000 over two or three years.  They used the proceeds for some home improvements, like a backyard waterfall, and to pay off credit card debt.

Earlier this year, while their credit was good, they bought a house outside of Houston for $283,000.  (They got 3600 square feet, which says something about where the good housing values are.)  Early this year they also bought a new Lexus and a Chevy Suburban.  They took a Caribbean vacation.  Then they moved out of their California house, leaving it to the lenders.  Just walked away.  Mrs. Oropeza is quoted as saying, "We’re sad because there goes our credit, and because people think we
are a bunch of flakes who walked away from the house and tried to make
money."  Yes, I’m sure she’s right: that’s what people think.

Shouldn’t there be some sort of government subsidy for these poor people?  They are living in a 3600 square foot house, driving a new Lexus and Suburban, but their credit stinks.  They won’t be able to borrow any money for a long, long time.  I’m sad for them.  No telling how long until they can take another Caribbean vacation.  I doubt they’ll be able to save for one, so they’ll have to wait until their credit rating improves.