We kept spending last month.  I bought a new boat (but a very small one), and the rest of you kept up with me. 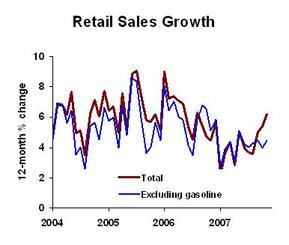 Last month’s sales were pushed up by high gasoline prices, but the non-gas spending held up.  Several of the categories with solid gains were discretionary sectors, such as electronics and sporting goods.  So consumers are not giving up the ghost.  That’s today’s good news. 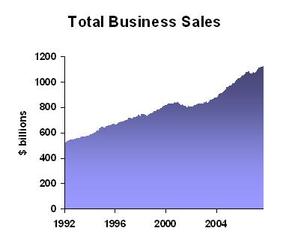 The 2001 recession shows up as a decline in sales, and a little dip in late 2006 also appears.  But we’ve recovered from that dip.  I’ve been calling this a "recessionette."  It caused a temporary run-up in inventories: 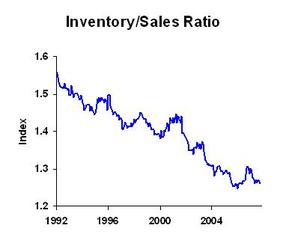 The inventory-sales ratio has a clear downward trend.  Companies are becoming better and better at operating with lean inventories.  The disappointing sales cycle of late 2006 caused inventories to rise.  Since then they have come down, but they are not yet down to the trend line.  Implication: no inventory increase until sales grow further.  This will put downward pressure on manufacturing for at least six months.

Business Planning Implications:  I don’t see a recession, but the inventory data justify the forecast of sub-par economic growth in 2008.