A good way to keep up with the world economy is to check out the International Monetary Fund’s, World Economic Outlook, which comes out twice a year.  Here’s what I learned:

Of the 30 developed countries, all had positive year-over-year growth from 2004 through 2007.  Of the emerging/developing countries, 138 out of 151 had positive growth for a four-year string.  (The 2007 figures are half-forecasts, of course.)

I went back to some old data, which goes back to 1970.  I could not find a comparably strong four-year period.  In fact, there were very few single years with such consistent growth, much less a string of four growth years.

Two things are going on here.  First, the rate of growth for the emerging countries has accelerated. 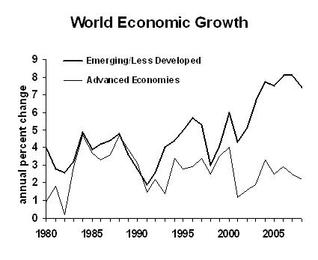 The second thing going on is the Great Moderation, which is a calming of the frequency and severity of recessions around the world.  (You can learn a lot about this is my short interview with Mark Thoma on the Businomics Audio Magazine.)

Will there be recessions in key countries of the world?  No doubt there will be.  But economic conditions around the world look better than I’ve ever seen them.