Lot’s of headlines say that the dollar is at a record low, but it only kinda sorta is.  The dollar, in fact, is at a record low compared to the Euro.  However, the Euro has only been around since 1999, so "all time record low" doesn’t mean very much.  For a longer term view, let’s also look at the trade-weighted index (which gives every major currency a weight proportional to its importance in U.S. foreign trade): 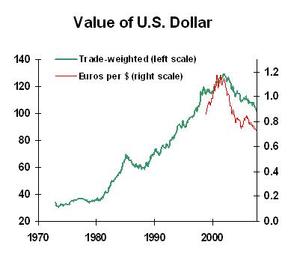 In the grand scheme of things, this decline doesn’t compare to where we’ve been.

What are the economic effects of the low dollar? First, a lower dollar stimulates the economy, by expanding exports (which boost GDP)
and contracting imports (which reduce GDP).  Sometimes it takes a while, often 12 to 24 months, before this effect is felt, but it always happens.  The economic forecast is a bit rosier because of the falling dollar.

A falling dollar tends to push up inflation, but don’t go overboard with this effect.  Imports are only 17 percent of total GDP, so we can’t expect too much impact on prices.

Does falling confidence in the dollar hurt us?  I’m not sure what the recent movements in the dollar say about expected future movements.  Does a falling dollar mean it will fall further tomorrow?  Or that it will bounce back to "normal" levels?  Exchange rates are notoriously hard to forecast; it’s even harder to figure out what other people will be forecasting.

Business strategic planning implications:  Exporting companies should be ready for greater sales volumes; companies competing with imported goods should expect to maintain market share, or even recover a bit.  Other businesses should expect higher prices for their imported inputs, but not significantly higher generalized inflation.

Investment strategy:  Being well diversified is good.  If you own foreign stocks, you’ve felt this already.  If you do not have significant overseas exposure in your portfolio, gradually build it up.