Lots of recession stories just don’t work, though they are common.  We have too much debt.  We’ll, we’ve had "too much debt" for years with no sign of collapse.  The federal deficit is too large.  It was even larger coming out of World War II, with no ill effect.  Globalization.  But the world economy is booming–how can that be bad for us?  Falling dollar: theoretically and historically positive for the economy, not negative. 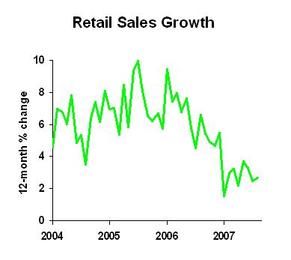 Home price appreciation, which seems to be the most likely issue related to consumer spending, peaked in 2004 (quarter over quarter calculation) or 2005 (year over year calculation).  If we were going to see a recession, I think it would be here by now.

The other good reason for worrying about recession is spillover from the financial problems associated with the housing weakness, especially sub-prime loans.  What I hear, however, is that standard-quality borrowers can still get credit.  That applies to consumers looking for credit cards, car loans, or mortgages, as well as businesses.  Even homebuilders, I’m told, are subject to the same credit standards as six months ago (though fewer of them meet the credit standards these days).

So I don’t see spillover from housing problems being large enough to trigger a recession.  There’s enough spillover that my forecast is for sub-par growth, in the two to three percent range, for the next four quarters.  And I’m continuing to recommend contingency planning for recession, but I ALWAYS recommend that.  However, businesses should be planning on increased sales and the need for increased capacity.  Companies that hunker down at this time are more likely to lose market share than improve their positions.