Risk in Financial Markets: Going Up?

Jim Hamilton over at Econbrowser has an interesting post entitled Where’s the Risk?  He looked at bond yield spreads and didn’t see any higher risk.

I wanted to look at daily data, in both long and short-term rates.  I found the risk:

I also found just a bit of an increase in longer maturities: 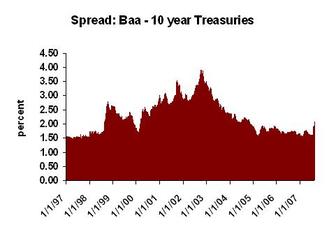 The widely-used Fed database of interest rates doesn’t include less-than-investment-grade issues, which is the first place I’d look for widening spreads.  Maybe one of you with a Bloomberg handy will show us some spreads.

This is good news: It suggests that the subprime crisis is not spilling over to other markets.  The risk of recession is not that the subprime mortgage market dries up; we can live without it.  The risk is that fundamentally sound borrowers will not have access to credit.  Although we could live with that in the long run, in the short run, a sudden drying up of credit is recessionary.

My best estimate: we skirt through this crisis without widespread repercussions.  But anyone who is  absolutely sure what the future holds is a moron.