Has The Fed Muffed It?

A trusted friend was ranting about the Fed, arguing that from 1999 on, the Fed has been first too loose with credit, then too tight, see-sawing back and forth.  I cut my teeth bashing the Fed for just such problems, but I’ve been more respectful in the past years.  It’s not just age.  Let’s look at three measures of Fed performance. First, let’s see how close the economy is running to its potential: 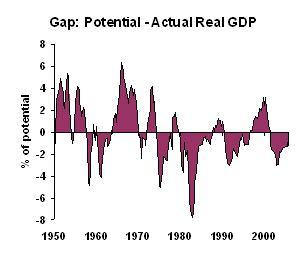 (Potential GDP is the Congressional Budget Office’s estimate of output that is sustainable, given our labor and capital resources.)

The 2001 recession shows up as a relative mild  experience, and we are approaching full output.

Next I looked at the quarter-to-quarter stability of the economy.   To measure that, I calculated the 20-quarter standard deviation of the quarterly changes in real GDP: 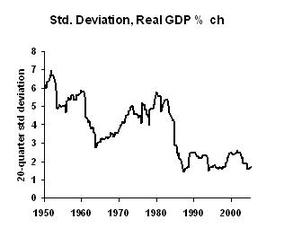 This chart shows the economy becoming much more stable, a change called the "Great Moderation."  (For more information on this, listen to my interview with Mark Thoma.)

Finally, there’s a strong argument to be made that the Fed should simply focus on keeping inflation under control.  Let’s look at their record: 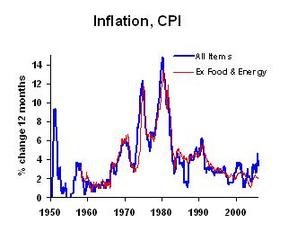 By all of these measures, the Fed has done a decent job in the past decade.  Certainly not perfect, but not nearly as bad as in the "good old days."

So suppose you want to be critical.  Look at the inflation chart, and you’d think that in the past year or two, the Fed should be tighter to keep inflation under control.  But look at the GDP Gap chart.  That suggests that the Fed should be looser to get actual GDP back up to potential.  Back when

So, my friends, keep on ranting, but remember that the Fed is doing a much better job now than in the past.  If they are making mistakes, they aren’t real bonehead mistakes.  They are dealing with a challenging environment.