The market’s been highly volatile lately.  According the CBOE’s VIX index, we’ve seen the most volatile market in the past month.  That got me to wondering:  are the traders heading off to the Hamptons for the weekend causing this?  The story goes like this: the market is a bit skittish, what with credit issues rolling around.  So traders sell all their positions before taking a long weekend, then repurchase their positions when they get back to the office.  It’s a good story.  Most good stories, though, don’t stand up to the data.

I looked at VIX data back to 1990 and averaged it by month to look for patterns: 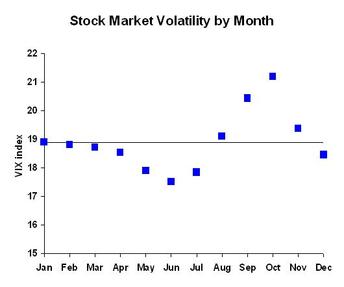 August isn’t much above average, but September and October are.  December I could understand as window dressing time.  Maybe the fall months are changing of the seasons: if an institution has been having a good first half, it’s time to lock in the gains with a safer portfolio.  If it’s been having a bad year, time to swing for the fences and try to come back.  Still, I’m not satisfied with that story.

Anyone have a better story?