Home > Blog > Consensus Economic Forecast: Rebound, but Not as High

Consensus Economic Forecast: Rebound, but Not as High

I’m a big fan of looking at consensus forecasts.  I recommend that they be used in business planning, even if I still prefer my own forecast over the consensus.  The logic is that most companies should not be betting on their economic forecast; they should be betting on their ability to serve customers while keeping costs down.  Few companies have a comparative advantage in economic forecasting, so just outsource to the average forecast, while keeping in mind the outliers.

Let’s talk about how to interpret a consensus.  The Fed of Philadelphia just released their Survey of Professional Forecasters.  I’m not a big fan of their write-up, so hit the pdf button to see the actual numbers.  Here’s the chart: 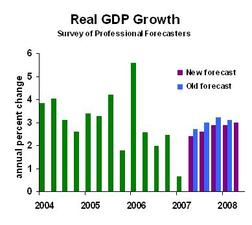 The first thing I look at is the direction of the forecast: they are saying that the economy will recover from the first-quarter slowdown.  Fair enough.  I’m with them on that, though my numbers are a bit higher than theirs.  Next, I look for the change in the consensus from the prior quarter.  That’s the difference between the purple columns (new forecast) and blue columns (old forecast).  The fact that forecasters are revising downward is almost as significant as their forecast of a rebound.  That’s telling me to take a fresh look at my forecast.  (Unfortunately, I’ve got a bunch of paying customers who want various analyses and reports, none of which is an updated economic forecast, so this will have to wait until next week.)

Also fun to look at is their estimate of the odds of a down quarter in the coming year.  Their probability of a negative number five quarter out has stabilized at 15 percent, down from over 20 percent in last summer’s survey.  Still, 15 percent is about one chance in six, so do some economic contingency planning.

By the way, let me mention why I don’t like the Philadelphia Fed’s write up of the consensus.  First, though, let me acknowledge they do a great service by compiling the numbers and making them available to the public for free.  Thanks, guys.  But here’s the gripe.  Read this:

The forecasters have cut their estimates for growth in 2007, even as their outlook for the labor market holds about steady. On a year-over-year basis, real GDP will grow 2.1 percent in 2007, down 0.7 percentage point from the previous estimate of 2.8 percent.

What’s omitted is that the previous forecast was made before we knew how weak first quarter was.  Mostly what happened is that the forecasters put in the new historical observation, shaded down their quarterly forecasts, by about three tenths of a percent, and wound up with an annual growth rate that’s 0.7 percentage points slower.  The actual forecast didn’t change by anything like 0.7 percentage points.  Moral of the story:  look at the numbers, skip the words.