Home sales are way up, thanks to falling prices.: 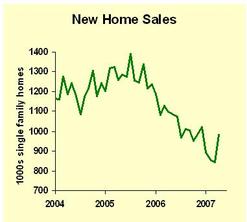 Looks like developers have finally decided to accept lower prices to get the houses moved: 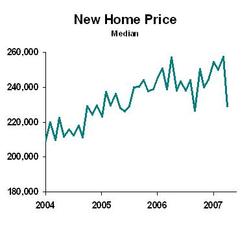 In addition to developers dumping inventory at fire-sale prices, this month’s pattern is partially explained by the Census Bureau’s survey methodology.   In a nutshell, when a developer reports a home sold, the Census Bureau takes that home out of its survey list.  If the deal later falls through, that home sale is not removed from the official report.  This is a highly relevant issue.  Toll Brothers, for example, just reported:

The second-quarter cancellation rate was 19 percent, down from the prior quarter’s rate of 30 percent, but still higher than a rate of 9 percent in 2006, Horsham, Pa.-based Toll said.

The Law of Demand says that at lower prices, more units of any good are demanded.  Homebuilders are riding the demand curve down to reduce inventory.  This is not a sign of an industry turning around.

Barry Ritholtz of Big Picture points out that large increases in sales are frequently reversed in succeeding months.  Calculated Risk notes that a year ago, first data release suggested that the housing market was bottoming out, but subsequent data releases refuted the early analysis.

My bottom line is that we are still vastly overbuilt, as I’ve posted about before.

Business Planning Implications:  No reason to be happy if you are in the residential construction supply chain.  Take today’s good news with a giant dose of salt.  For the rest of businesses, be happy that developers are taking their medicine and moving inventory.  That’s exactly what is needed to work through the overhand.

Investment Ideas:  There is still way too much optimism about residential construction.  Stay away.