"Gloomier" may be too strong a term, but forecasts are a touch lower now than three months ago.  I like to follow the Philadelphia Fed’s survey.  Before we go to the results, let’s review consensus forecasts:
1) consensus forecasts (averages of forecasts) tend to be more accurate than any one forecaster
2) they are not perfect, in case you needed that reminder
3) the revision of the forecast from one time period to another is significant

Here are the highlights of the latest consensus economic forecast: 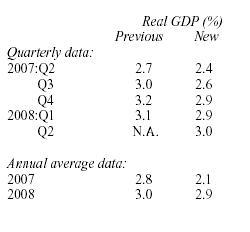 The old joke is that economists forecast GDP to the nearest tenth of a percent to show that we have a sense of humor.  When the the change in the forecast is two or three tenths, though, it’s worth taking seriously.

The risk of a negative quarter is just a bit higher: 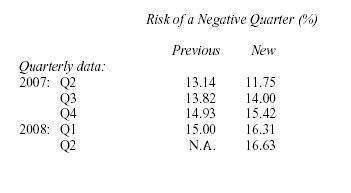 Remember that the rule-of-thumb (but not the official definition) is that a recession is two consecutive negative quarters for GDP.  This survey does not ask the question of two quarters.  But if the risk of a negative quarter is running about 15%, then the risk of recession probably is a little lower.  My own guess is that the risk is higher, more like 20% chance of a recession beginning in the next 18 months.

Business Planning Implications:  The new forecast puts economic growth just a hair below the long-run average, so no need to panic.  Take the downward revision as a negative sign, though, and take seriously the possibility of slower economic growth, even a recession.  This is not contradictory advice: plan for solid growth, but also do economic contingency planning, as we’ve suggested before.