Detroit Hurting–Legacy Costs Not the Problem

Detroit is hurting, but don’t be mistaken–auto sales aren’t bad.  Instead, it’s American brands that are doing poorly, while foreign nameplates are doing alright.  (We refer to brands and nameplates, because about half of the "Japanese" cars are made in America.)

From the 2006’s first quarter to 2007’s, total cars and light truck sales were off about one percent, but the swings between gainers and losers are far greater. 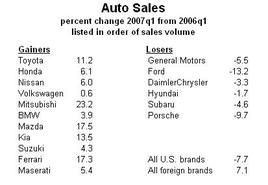 Journalists have a made a great deal about "legacy costs" of perhaps $1000 per vehicle, as reported in a University of Michigan study.  Saying that Detroit is losing market share because of its legacy cost disadvantage is proof positive that the observer is ignorant of Economics 101.  Let’s have a lesson.

Legacy cost per vehicle is terribly misleading.  One takes total legacy costs (like retiree health care) and divides that dollar figure by the number of cars produced.  Legacy costs do not expand or contract with current production volume; that’s one reason to call them "legacy" costs, rather than current expenses.

Pricing decisions are made at the margin, as in "should we build one car more, or one car less?"  (OK, maybe it’s really 1000 cars more or 1000 cars less, but you get the point.)  The total amount of legacy costs is independent of the number of cars made.  So building one extra car does NOT add another $1000 of legacy costs.  The variable costs, along with demand for cars, determine the most profitable level of production, and the best possible price at which to sell the cars.  Legacy costs affect the overall level of profit, but do not affect the profit-maximizing level of production or price.

So why is Detroit losing market share?  Two reasons.  First, they have the wrong products for today’s market.  Big SUVs and pickup trucks are so 2002.  This is 2007, and gas costs $3.00 a gallon here in Oregon.

Domestic automakers’ real legacy cost is consumers won’t buy their cars after being burned for decades by lousy product and worse warranty performance.

The Conerly family has had great results from two Subarus, a Toyota and a Honda.  We’ve had poor results from two Chrysler products and an MG (though the MG was tremendous fun for a single young economist; sigh).  The Volvo was in between the Detroit brands and the Japanese in terms of quality.  This experience is typical, according to Consumer Reports’s annual car survey.  I believe that Detroit quality is improving–but it hasn’t caught up to Japan yet.

One of Detroit’s problems is a failure to understand the Trial and Error nature of the economy.  Their business plans made sense if the overall car market increased over time, which it did, and if Detroit’s market share held up, which is did not.  There was no flexibility in the plans.  Excess workers are paid to not work, and costs were shifted into the future.  They’ve boxed themselves into a corner.