Earlier this week we posted that "Consumers Feeling OK."  The may be feeling OK, but they are acting happy. 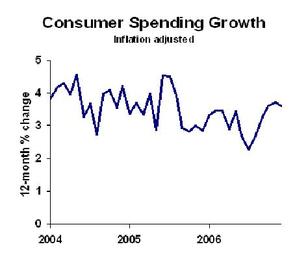 Our recession fears have been based on the risk that the housing downturn spreads over into consumer spending.  That has not happened yet, and I see the risk dwindling.  Last fall I believed the risk of recession was one chance in four.  I’m now saying one chance in ten.  That’s still significant, but not as bad as it used to be.

Business strategy implications:  Look for continued strength of consumer spending through 2007.  Give some worry to handling upside risk, assuming that you’ve done your contingency planning for downside risk already.