I’ve been criticized, nay, laughed at, for my forecast of falling oil prices.  But now the Wall Street Journal reports that oil consumption fell last year in the developed world.  The emerging countries increased their usage, but total global oil consumption increased by less than one percent. 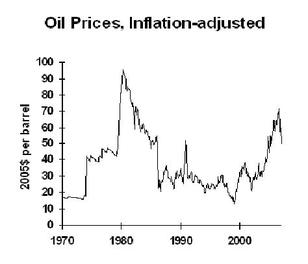 Take a look at 1986, the year that oil prices fell sharply.  After that, exploration and developed dropped significantly.  In the late 1990s, oil companies earned little money and invested little.  The new world of higher oil prices is fairly recent.

So the world didn’t have great reason to explore for oil until the last few years, and it takes a while to bring new production on line.  It also takes a while to adjust consumption to the new price level.  But these adjustments are taking place.

My forecast: we’ll see $35 oil, at least for a day, sometime this year.

Business Strategy Implications:  Don’t bet your business on high energy prices.  In particular, if you’re contemplating a major capital expenditure which pays for itself only if oil prices stay high, be cautious.  Certainly take any easy steps you can reduce your energy usage, but we wary of bet-the-business gambles.