The trade deficit declined, largely due to the smaller dollar value of oil imports.  The non-petroleum deficit has been fairly stable for the last year. 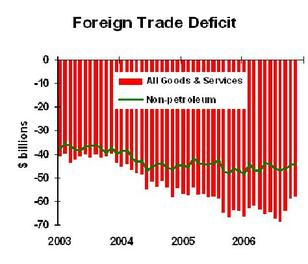 I don’t place much importance on these figures, though plenty of my Wall Street colleagues think that they are important.  After speaking to a group of electrical contractors earlier this week, one came up to me and said, "For years I’ve been worrying about the trade deficit.  And it’s been getting worse and worse.  But I haven’t really seen any harm come from it.  Should I stop worrying?"  I told him that  if he doesn’t have 300 things to worry about more important than the trade deficit, then he’s not spending enough time on his business.

Others Posting on This Topic:  Brad Setser discusses the data plus China’s data release; The Intangible Economy has comments on (you guessed it) trade in intangibles.