The Wall Street Journal ran an article yesterday (subscription required) with the headline, "Renters Gloat Over Housing Slump."  They quote an economist, Dean Baker, who sold his condo and is now renting.  To add credibility, they note that he called the crash of tech stocks in comments quoted in March 1997, three years before the peak.  That sounds good–but it’s actually a pretty rotten forecast.

Take a look at an index of tech stocks: 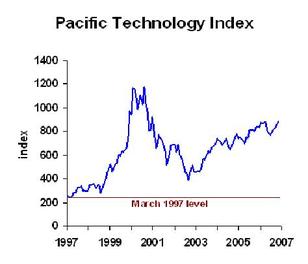 The blue line shows the index values, including the boom and the bust.  The red line shows the level of the index in March 1997, when Dr. Baker was predicting a drop in tech stocks.  If you had taken his advice as a contrarian indicator, and BOUGHT when he said to sell, your portfolio would have had gains even after the bust.  In fact, if you had sold at the very worst part of the bust, in September 2002, you would have made 59 percent gain in your holdings.

I’m not writing this to make fun of Dr. Baker.  In fact, I made exactly the same prediction in 1997.  I’ll eat the same humble pie.  But here’s what I’ve learned: being right about a market too early is pretty much the same as being wrong.