Capital goods orders declined last month.  The sharpest drop was for aircraft, which are very volatile.  In practice, civilian aircraft orders are mostly Boeing business, which is doing very well when you abstract from the month-to-month gyrations.  In fact, over the last 12 months their orders have run nearly three times their production level–and they’ve ramped up production substantially. 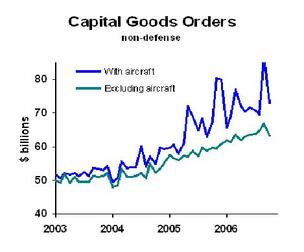 Other business equipment orders also dropped.  Right now it looks like part of normal fluctuation.  The preceding month had been up strongly, and we’re about on trend.  Nonetheless, there is some potential fall-out of capital equipment purchases due to the collapse of residential construction.  Those contractors who build houses are not buying new pickup trucks, backhoes, or even office computers.  Right now I don’t expect capital spending to slow down significantly.  In my forecast for next year, sales growth for capital equipment runs inflation plus 6.5%, which is just a bit lower than in 2006.

Business Strategy Implications:  If your capital equipment business includes significant sales to residential contractors, look out for more declines.  Otherwise, look for good growth next year.  (But watch carefully, because there is some possibility of a downturn in the sector.)