Home > Blog > What is the Yield Curve Saying?

What is the Yield Curve Saying?

With long bond rates declining recently, and the yield curve inverted, is this reason enough to expect a recession? 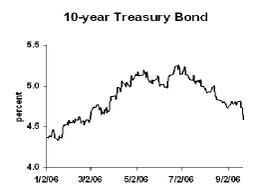 Let’s take a look at as much history as we can (at least, as we can using daily data from FRED database.  I looked at the spread between the 10-year bond and the 1-year bond.  (Constant maturity yield calculations for bills shorter than one year do not go back as far as the 1-year.) 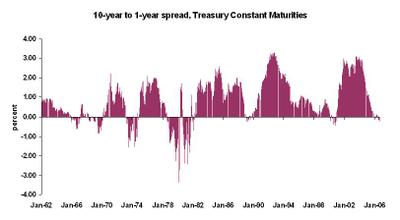 The worst recession of the postwar era is well noted by the data: the double-dip recessions of 1980-82.  The next worse recession, 1973-75, is also well defined by the yield spread.  One can also see the relatively minor recessions of 1970, 1990 and 2001, though the yield curve was just barely inverted for the latter two downturns.  There are also a couple of non-recessions with inverted yield curves.

Now let’s look at all the periods (aside from one or two stray months) with the one-year yielding more than the 10-year:

I wanted to look at cases where the long-rate had dropped to cause the inversion, rather than when the short-rate rose.  In period since last December, we have had rising short rates, but just the last two months the inversion was increased by a drop in long rates.  Although it’s rare for the yield curve to invert solely because of a decline in yield in the long bond, it’s possible, and the last time it happened, a recession followed.

Caution: correlation is not causation.  An inverted yield curve by itself does not cause recession.  Rising short rates can cause an economic slowdown, and falling long-rates can reflect market expectations of a slowdown.  Thus, the yield curve is a good indicator of a coming slowdown.  However, it is not definitive proof that a recession is coming, as evidenced by the two periods in the 1960s which did not lead to recession.

What to make of the current inversion?  Certainly the growth rate of the economy is slowing, but I believe that the bond markets have overdone the doom and gloom.  GDP growth won’t turn negative, and bond rates will rise back again, reaching 5.5 percent late next year.  However, a dose of caution is warranted.

Business strategy implications: Plan on growth next year, but at a slower pace.  Do your contingency planning.