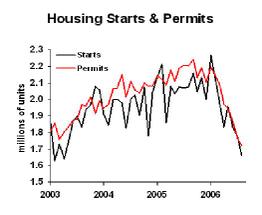 The August figures for starts and permits are not record lows, but the drop in the past six months is unusually steep, measuring down 21.9%.  Have we seen such a drop before?  Sure, during the 1990-91 recession.  Before that, for one isolated period in 1984.  Prior to that, the 1980 and the 1981 recessions, and the lead-up in 1979.  Then there was the 1973-95 recession, and in 1969, just before the 1970 recession.  And the 1960 recession.  The only non-recession drops of this magnitude occurred during the 1966 credit crunch, when the thrift industry had no money to lend to homebuyers at any interest rate.

Does this mean we’re entering a recession?  I think not, because this time round, housing seems to be unusually disconnected from the rest of the economy.  But two points are clear:  the housing sector is entering its own recession, and the entire economy is at risk.