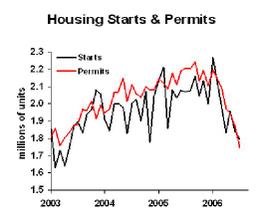 The survey of home builders attitudes looks the same: 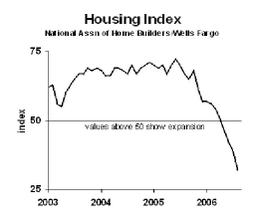 These data confirm yesterday’s news that sales of existing homes were declining, and home prices were softening.  We’ve expressed our pessimism before,here (written before the downturn), and here and here.  With a little more decline the rest of the year, 2006 housing starts will be down 10% from last year.  I forecast about another 10% decline in 2007.  My worry: I’m not pessimistic enough about housing.

Will weak housing bring down the whole economy?  It’s certainly ground zero in the slowdown (of growth rate) that we’re seeing now.  But, the difference between my forecast of down 10% on residential construction, versus a level forecast, is less than one percentage point of GDP growth.  In other words, housing can contribute to weakness, but it won’t, by itself, cause a recession.

There is a connection, however, between the housing economy and consumer spending.  With home prices accelerating less rapidly, and with higher mortgage rates, there will be fewer cash-out refinancings.  Also, consumers will soon perceive that their home has not helped increase their net worth, so some savings might be in order.  Thus, the weak housing economy should lead to somewhat softer consumer spending.  Again, though, the magnitudes just don’t work out to be recessionary.

Business strategy implications: Housing supply chain should REALLY hunker down now.  Sellers of interest sensitive big-ticket items (like car dealers) should BEGIN to hunker down.  The rest of the business community should start thinking about contingency plans for a recession or economic slowdown.