GDP grew at a strong 4.8 percent rate in the first quarter.  Long-run average is about three percent.  A figure in the neighborhood of five percent was generally expected by us economists. 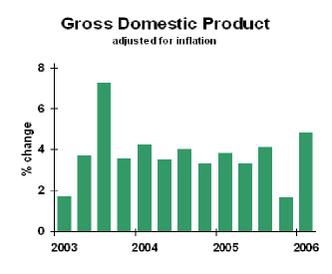 Major contributors to the uptick were consumer durables spending (Q4 had been a poor quarter for car sales), business capital spending, exports and government.  Fourth quarter of last year was abnormally weak; first quarter was abnormally strong.  Average them together (3.2 %) for a realistic view of economic growth.

Business strategy implications:  No sign of the economy slowing down, but neither are we growing excessively fast.  Overall, look for continuation of current growth rate.