The employment cost index grew by about three percent in the first quarter.  Surprisingly, benefits costs have decelerated and now are growing at about the same rate as wages: 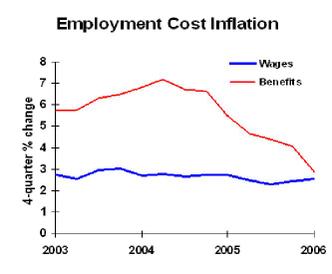 This data series is better than the more commonly cited "average hourly earnings."  For AHE, let’s say that everyone with a job got a 10 percent raise, and we also added a huge number of new workers at the bottom of the wage distribution.  Average hourly earnings would not go up by 10 percent, because we have to average in all of the new workers.  The employment cost index, however, just measures growth of wages for those who continued in their job from one year to the next.  Thus it’s a better measure of how people are doing.  Right now they are not quite keeping up with inflation, because of the steep energy cost increases.  If energy prices retreat, then workers are in good shape once again.  Like duh.

Business strategy implication: Not much pressure on wages so far, though I’m hearing plenty of stories of companies having a hard time finding good workers.  Expect wages and benefits costs to accelerate this year.