Most headlines are reading "Foreign Trade DEFICIT Declined," but I’m not very interested in the trade deficit.  It’s hard to see that it’s affecting us much.  After all, the most widely expected result of the high trade deficit is a falling dollar, but the dollar has been roughly flat for over a year.  Secondary effect that’s been expected is rising U.S. long-term interest rates.  Biggest surprise in the economy?  The failure of long-term rates to rise.  So maybe we’re better off ignoring the trade deficit.  Instead, let’s look at trade flows.

Exports were off just a touch in February:

The trend is OK; I’d have to see several months of decline before I started to worry.

Imports were also off a bit: 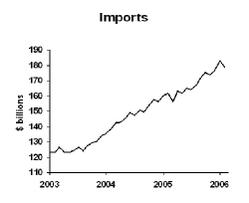 The small drop in imports was spread across most categories except energy, which was stable from the preceding month.  If imports continue to decline, that will tell us the economy is weakening.

Business implications: No need to change plans at this time, but the decline in both imports and exports bears watching as a possible harbinger of slowing economic activity.