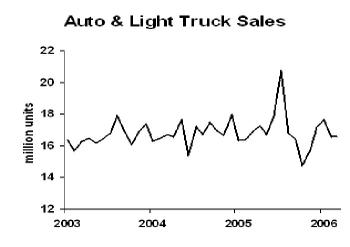 I expect car sales to sag a bit in 2006, due to rising interest rates.  Surprisingly, though, the low rates of the last few years have not really stimulated new car sales above average.  To look at long-term trends, I calculated car sales per 100 residents, to adjust for the growing population: 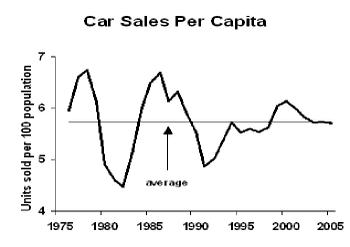 We’re right on trend!  And even though interest rates are rising, they won’t be going higher than normal, so what’s the reason to expect new car sales to drop below trend?  I think that the longer useful life of the modern car argues for a gradual decline in car sales relative to the population.  In past decades, this was countered by increasing density of car ownership–more cars per capita.  But we’re now close to market saturation (in terms of number of cars, not quality, of course).  I think that rising monthly payment costs will exact a small toll in new car sales.  Nothing major, mind you, just a modest setback for sales.

Business implication:  Expect no collapse of the car industry, but don’t go looking for a boom, either.