The Wall Street Journal ran an ad headlined "Recession Proof."  The ad was for franchising tax preparation services.  Seems reasonable, right?  Everyone has to file a tax return, even during a recession.  Well, it turns out that they don’t have to pay someone else to do it.  In the average recession, consumer spending on tax preparation services drops 14 percent from peak to trough (inflation-adjusted and seasonally adjusted).  The average recession lasts 15 months in this industry, from peak to trough.  After the trough, it usually takes another 24 months to regain the previous peak level of spending.  That’s not recession proof in my book.  Here’s an example from the 1980 recession: 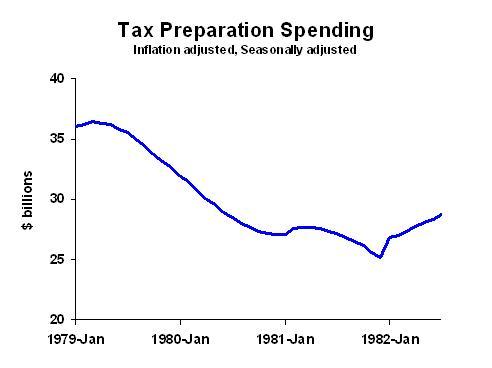 My purpose is not to trash this franchise opportunity.  It may be a great business, all things considered.  However, claims of being recession proof are most often wrong.  Take them with a grain of salt until you’ve looked at the data.