Home > Blog > Why Did the Mortgage Crisis Happen, Part 2

Why Did the Mortgage Crisis Happen, Part 2

The
Great Moderation is the new world of macroeconomic cycles that began in
1983. In the United States and around
the world, recessions became milder and less frequent. (There’s a great interview with Mark Thoma
about this topic in the Businomics Audio Magazine.)  The chart of rolling 20-quarter standard deviation of real GDP changes illustrates the calming of the economy: 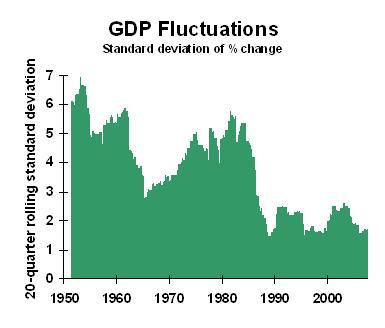 The
Great Moderation by itself lowered fears of recession, but the nature of the
most recent recession (not counting the current cycle) also reduced concerns
about a possible downturn in housing values. The 2001 recession was triggered
by a decline in business capital spending, especially in high tech and
communications. Housing suffered
relatively little; it was the mildest housing cycle of the postwar recessions.

As a
result of the Great Moderation and the strength of housing in the 2001
recession, the housing sector appeared to be recession-proof. This was a mistake, and those of us who like
to examine long data series knew it, but financial types prefer to look at
recent data. When I attended my first
Credit Policy Committee meeting as a bank economist, back in 1988, the
experienced lenders priced consumer loans based on a five-year average loss
rate. I was thunderstruck! The
five-year period did not go far enough back to include a recession. In fact, credit policy coming out of a
severe recession tends to be tight, so we were probably looking at abnormally
good credit history. This is the kind
of stuff that financial people should do a better job at.

Next:
the role of securitization in the mortgage mess.