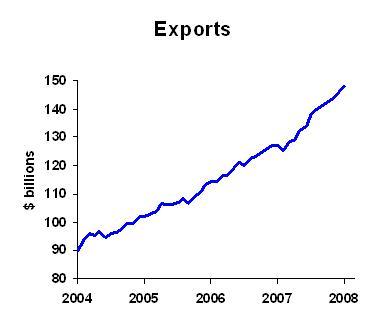 Over the past 12 months, the increase was 16.6 percent.  All categories of exports increased, with agricultural products showing the largest gain.  That’s due more to prices than quantities, but the stimulus to the American economy is there all the same.

I run into people who think we don’t export much.  The large trade deficit probably leads them to think that, but it’s not true.  Even though our imports are larger than our exports, we export $1.6 trillion of goods and services every year.  Further, our exports have consistently grown much faster than the overall economy.  That’s likely to continue, thanks to strength of foreign economies as well as the falling dollar (which makes our products cheaper to foreigners).