The latest figures from the International Energy Agency show that last year’s growth of oil consumption was pretty modest.  Here’s a chart comparing oil demand with the IMF’s estimates of world GDP growth: 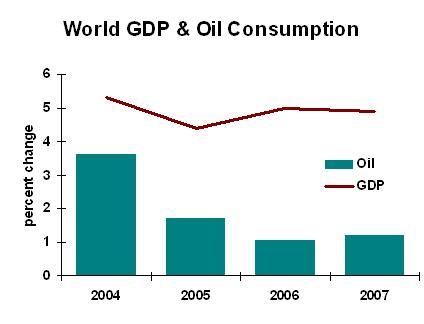 Slower growth of oil consumption in 2006 and 2007, without a comparable drop in GDP growth, shows conservation effects.  A little economic slowdown, plus more time for the price elasticity to work its magic, and oil demand will be unchanged from one year to the next.  Add to that the large number of megaprojects that will be coming on line and I’m pretty optimistic about oil prices.  (Though I confess I’ve been wrong on this subject in the past.)