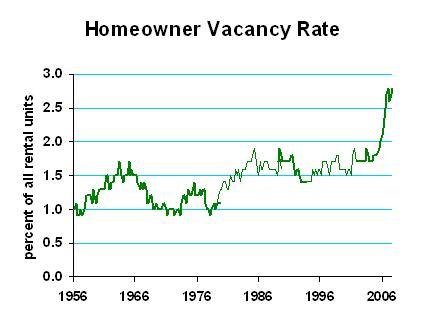 Current vacancy of non-rental  housing units is 2.8 percent.  To my eye, a generous estimate of "normal" vacancy is 1.7 percent.  That difference, on a base of 78 million housing units, translates to 0.86 million too many non-rental housing units.  (On the chart, changes from thick to thin lines show changes in definition by the Census Bureau.) 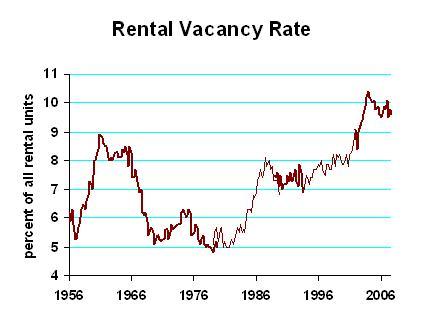 Total excess housing units in the United States:  1.5 million units.  (That’s not a high precision estimate, but the true number, if it could be determined, is at least 1.3 million units, I think.)

Annual demand for new housing from population growth, change in family size, and second homes: about 1.4 million units (my estimate).  Average number of "losses," which includes tear-downs:  0.3 million units.  The losses are very volatile, but let’s be generous and say that we need 0.3 million just to replace deteriorated housing stock.  Annual new demand for housing is 1.7 million units.

If homebuilders took 10 1/2 months off, we’d have supply-demand balance nationally.

I know, it’s not a national market but rather a bunch of local markets, and you cannot move housing from areas of excess to areas of demand.  However, we obviously have too much housing in total, and that means that much of the country must also have too much housing.  The recent declines in new housing construction are not enough.  Look for another year of falling new construction and falling prices.