Europe’s Economy Decoupled from the U.S.?

Will the United States economic slowdown pull Europe down enough that we in the states will have an additional problem from them?  Or from a European perspective, has their economy decoupled from the U.S. to the extent that they’ll be immune from our problems?

In theory, the knee bone is connected to the thigh bone.  However, the magnitude of the connection can vary from country to country, and from time to time.  The Euro area’s GDP in 2007 will be about $11.9 trillion this year (according to IMF estimates).  U.S. imports from the Euro area have totaled $245 billion in 2007 through November; let’s say $267 billion for the full year.  So Euro area’s exports to the U.S. account for just two and a quarter percent of its GDP.

How much of a drop in our imports (Europe’s exports) might we have in a U.S. recession?  Last recession our imports fell by 5.5 percent.  Let’s say that with the fall of the dollar, our imports really drop, by say ten percent.  That would cut 0.2 percent off of Europe’s growth rate, plus multiplier effects if any.  That does not send Europe into recession.  As for the echo effect, U.S. exports to Euro area amount to about 1.3 percent of our GDP.  You take 1.3 percent of a 0.2 percent drop and you get a trivially small number, less than three thousandths of one percent.  So forget an echo recession, unless . . .

The direct effect of a U.S. slowdown on Europe will be small, but it’s possible that the same factors which are weakening our economy are also at work over there.  In that case, Europe could sink into recession for the same reasons we do, but not because we do.

But it turns out that the housing cycle is much milder in Europe than in the U.S. Take a look at the OECD’s chart, which includes their estimates for 2007 and a forecast for 2008: 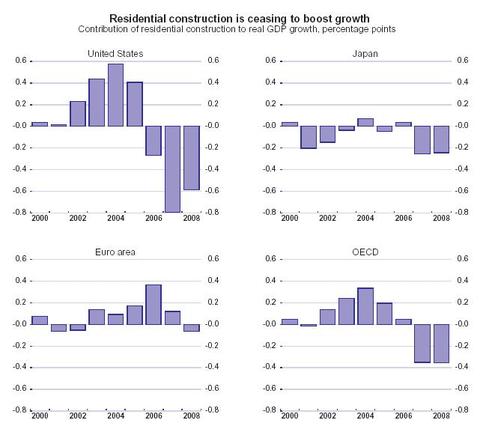 The bottom line is that I do not export Europe’s economy to slow down very much, certainly not enough to slow down the U.S. economy.