In updating my economic forecast for the new year, I surprised myself.  I walked into the spreadsheet moderately gloomy (I thought) and plugged in conservative numbers.  Out came a fairly pleasant forecast: 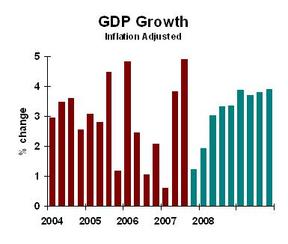 There’s weakness in the current (fourth) quarter, and then things look better.  I did put some dreadful numbers in for housing construction, but that sector is now only 4.5 percent of total GDP.  I clobbered housing starts, but that doesn’t have a huge impact on GDP.  I brought down the growth rate of consumer spending for a couple of quarters, and kept inventory growth down to near zero in the first half of 2008.

What’s keeping the forecast up?  Export growth will remain strong, and import growth will weaken.  Nonresidential construction, though it will decelerate, still grows at a nice pace.  Late in 2008 I see business spending on equipment and software recuperating.  Defense spending grows at the recent pace, then the growth rate slows.  I have less confidence in this area.

Why the disconnect between my economic outlook and the news reports?  I think it’s a weighting issue.  For instance, when the housing starts numbers come out and they are rotten, that fact is seized on by the press.  Same thing for falling home prices.  If you weight the facts by the barrels of ink spent on them, then gloom prevails.  In my forecast, though, I actually plug in how many dollars are represented by the new residential construction sector.  Turns out the impact of that sector is relatively small.

Why am I not in with the extreme doom-and-gloomers?  I think they are so committed to their hell-in-a-handbasket theories that they weight the evidence by how much it confirms their dour forecast.  Maybe I could be accused of weighting the numbers by my usual optimism, but I honestly started my latest forecasting exercise expecting a lower forecast.  I went subsector by subsector putting in my best estimate of the forecast, then calculated the total.  "Wow!" I said, something must be wrong.  I even double checked the spreadsheet to make sure the formulas were working correctly.

Then, just for fun, I created a recession forecast. The easy way is to just pencil in a couple of bad quarters of GDP.  I interesting way is to start depressing the specific components in a reasonable way that results in a recession.  First pass: I only got one negative quarter of GDP.  So I went through a second time, and this time got a very mild recession.  You have to be really harsh with your assumptions to get a hard-core recession.

My economic forecast: sub-par GDP growth for two quarters, then a return to reasonably bright growth.