Employment Weak, The Fed Will Ease

Seeing that housing-related problems were not spilling over into other sectors, I was not expecting the Fed to ease later this month.  I was expecting a move early next year, when inflation would be lower.

Today’s employment report, though, argues for a Fed ease. 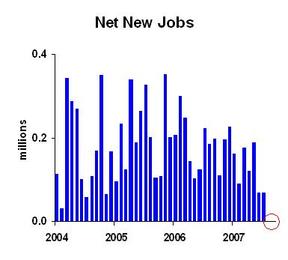 I’ve highlighted to most recent data point with a circle, because otherwise you wouldn’t see it, it’s so low.  No one should take one data point too seriously, but the trend had been toward slower job growth.

The Fed Funds rate has also been in tightening mode.  I measure this by looking at Fed Funds adjusted for inflation relative to its long-term average: 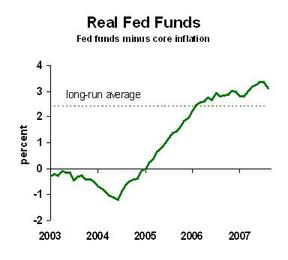 By this gauge, the Fed could cut 65 basis points just to put Fed Funds into neutral.  From the perspective of the most likely forecast for the economy, the Fed has reason to ease.  I continue to believe that bailing out Wall Street investors is not on their list of concerns.  But keeping Main Street businesses operating is important to Ben and the boys.