Home > Blog > Core Inflation: What Is It Good For?

Core Inflation: What Is It Good For?

Lots of discussion now about whether the Federal Reserve should be looking at core inflation.  Core, in the typical definition, is total inflation excluding food and energy prices.  On the surface, this seems silly:  food and energy are significant parts of our lives.  That’s certainly true of me.  I eat food most every day, and drive like crazy.

But the Fed doesn’t really care too much about my daily life.  Oh sure, Ben checks in on how I’m doing every now and then, but I’m not sure how much he really cares.  What the Fed is trying to do is keep overall inflation under control.  But food and energy contribute a lot of noise to the data.  When inflation spikes up because of oil, the Fed’s board members rub their chins and wonder, are we keeping inflation under control or not?  Maybe the oil price impact on inflation is transitory.  (Note that oil prices don’t have to come down for the spike to be transitory; so long as they stop rising eventually, the effect of oil on inflation will be temporary.)

Over the long haul, total and core inflation tell the same story: 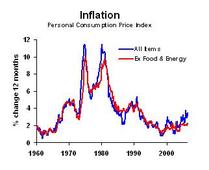 But over the short-run, they are very different: 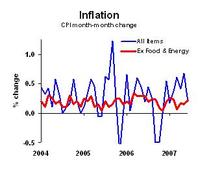 Is core inflation the best measure?  It turns out not to be.  The best seems to be the "16% trimmed mean core inflation" measure.  What’s that?  Imagine laying out in a table all the individual components of inflation.  Corn is on one line, motor oil on another, haircuts on a third, etc.  Now, pull out 16% of the items (based on their weight in the total index) that are farthest away from average.  That is, compute an average after trimming out the outliers.  This measure does better than the regular core inflation at predicting future inflation, and thus telling the Fed how it’s doing on keeping inflation under control. 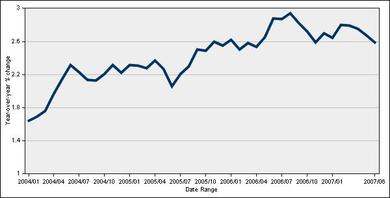 David Altig over at MacroBlog has a good discussion of this issue.