Home > Blog > Inflation Edging Down; Next Fed Move Will Be to Lower Rates

Inflation Edging Down; Next Fed Move Will Be to Lower Rates

Inflation is edging down.  The measure most watched by the Fed is the personal consumption expenditures index excluding food and energy.  Here’s the 12-month percent change chart: 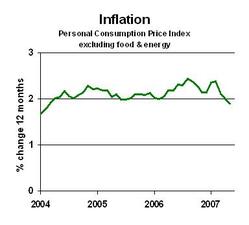 The Fed has said that their comfort range is from one to two percent, and we’ve just slipped below two percent.  Should make them feel comfortable, right?  Wrong.  The Fed has not spoken so much about their comfort range lately.  I think they are still nervous, though happy that the numbers are moving in the right way.  One problem with 12-month percent changes is that it takes a while for shifts to slow up, so I also look at the month-to-month changes: 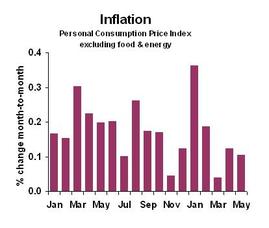 Although the pattern is a bit ragged, it does seem clear that the average is declining.

The Fed held steady this week, but what’s their next move?  I like to gauge the short term interest rate (The Federal Funds rate) against it’s long-run, inflation-adjusted average.  By that measure, we’re over 3/4 of a percentage point above average.  In other words, the Fed is in a slightly contractionary policy stance.  The need to drop short-term interest rates to get to neutral.  I don’t think there’s an emergency, but I expect them to cut rates by the end of the year.   Their economic forecast says that they can do that without triggering higher inflation, I bet.  But they are also nervous about the uncertainties inherent in any economic outlook.