Slower economic growth is the theme in a series of government reports this morning, but I’m not yet with Alan Greenspan, who says there is a one-third chance of recession this year.  Let’s hit the news first, then I’ll talk odds of recession–and what to do about it.

Retail sales growth was down last month, though the seasonals of springtime apparel sales are hard to fathom. 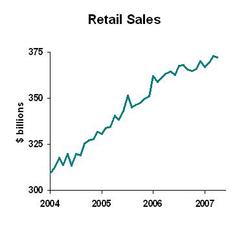 The chart shows clearly the deceleration from steep growth to more gradual growth.  The April data were encouraging with respect to the most discretionary purchases:  furniture, appliances and electronics.  Apparel and general merchandise store sales were weak.  My best guess: retail isn’t as bad as the headlines suggest.  But retail sales are certainly not as strong as a year ago.

For the economy as a whole, our growth slowdown has caused inventories to balloon.  They are now being worked down:

Note that this chart shows many years of data, and a clear trend toward leaner inventories.  (The inventory figure includes retail, wholesale and manufacturer inventories combined.)  Looks like there’s still more inventory reduction to be done, which means when you spend a dollar, you are triggering less than one dollar’s worth of production.  A few cents of what you buy is coming from reduced inventory levels.  This suggests another quarter or two of sub-par growth for the overall economy.

Producer prices where schizo last month.  Higher energy costs pushed the PPI for all finished goods up, but the core inflation rate, which excludes food and energy, was flat: 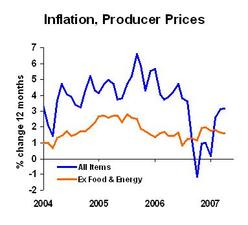 Back to Greenspan.  What are the odds of recession?  We know housing is weak, and I’m on the pessimistic end of the spectrum there.  But housing alone won’t trigger a recession; something else has to pile on.  We’ve been thinking that something else might be weak consumer spending, but despite today’s retail sales report (and yesterday’s chain store sales report), I don’t see enough drop in consumption to trigger a recession.  We had been observing declines in business orders for non-aircraft equipment, but that is looking a bit better now.  All in all, I think the odds of a recession starting before the end of 2008 are about one in five.  That’s high enough that you’ll want to read Businomics and do the contingency planning suggested in chapters 5, 6 and 7.