Are automobile sales poised to plunge?  The April data have prompted worry from bloggers Kash at The Street Light and Jim Hamilton at EconBrowser.

Car sales may edge down, but don’t think that we’ve over-bought cars in the past few years in the same way that we over-bought houses.  (If you don’t know what I’m talking about, see my post on excess housing inventory.)

Here’s the long-term view of car sales, normalized by population: 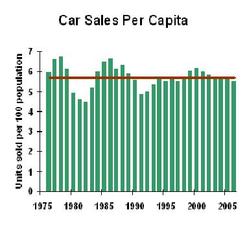 OK, there’s no reason to think that "normal" is a straight line.  The straight line in the chart is simply average over this time period.  With cars of higher quality and lasting longer, we might expect that fewer annual sales would be needed to have the same old stock of working cars per capita.  However, high incomes suggest a higher desired stock of cars relative to the population, meaning higher annual sales.  And there’s no theoretical reason to expect these two long-term trends to balance each other.  So it’s interesting how flat the trend is in the chart.

For the short-term outlook, my take-away is that we have NOT been over-buying cars in the recent past.  If there was an exuberant market, it was back in 1999 and 2000, when we were exuberant in oh so many ways.

Looks like 2006 was a touch below normal, so again no sign of excess stock that would depress future spending.  Now let’s look at the recent data: 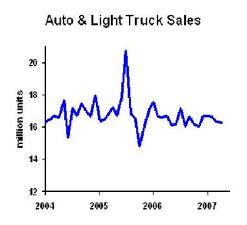 The last month’s data are down, and maybe the trend is slightly down, but sales have not, at this point, fallen off a cliff.  Note that Detroit’s problem is primarily market share, not the market trend, as I pointed out here.

Now back to Kash and Hamilton’s worries.  Sure, car sales could drop.  Bleed through from housing woes is a genuine risk.  But it’s not at all inevitable.  Financing costs are roughly proportional to the interest rate on 2 year notes, which is down almost half a percent from the peak rate of last summer.  Employment and incomes are still growing.  Detroit eventually builds what people want, though it sometimes takes quite a while.  Finally, look at the spike back in July 2005.  When the car companies want to goose sales, they know how to do it.  And because their labor contracts don’t allow them to cut labor costs when demand slackens, Detroit has strong incentive to provide the rebates and below-market financing needed to boost sales.  So I’d be more pessimistic about automakers profits than their unit sales.

Investment Advice: I have to believe that the day will come when auto stocks are a good buy.  Every dog has its day.  I’m just having trouble imagining when that day will come.