New home sales were up in March, the newspapers say.  Pull out your magnifying glass and marvel at the rebound: 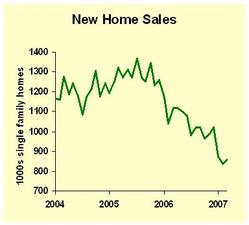 So OK, sales went up.  This is the same month that sales of existing homes plummeted, as noted yesterday.  Maybe the lag time between deal and closing is shorter in new homes, so that we saw the bad weather in February’s new home sales rather than March’s.  Still, not a lot of reason to celebrate here.

I watch carefully the inventory of new, unsold houses that are completed or under construction.  (I ignore those that are for sale, but no work has begun.  That’s not a house, but a developer’s hope.)  We are working down the inventory: 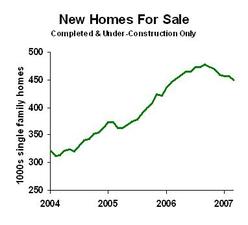 Business Planning Implications:  The residential construction food chain must continue to hunker down.  No relief in sight.  The consumer sector is generally not feeling fallout from the housing problems, but some bits of news make us nervous.  For example, Barry Ritholtz notes weak sales of a couple of major boat companies.  (Although I wonder if West Marine’s sales drop was due, in part, to abandonment of sailboat owners, who were their original customer base.  Do I sound bitter?)